Skip to content
UP TO $75 OFF SELECT IPHONE MODELS UNTIL 2/6/23
You are already subscribed.
Thanks! Your $20 bonus has been sent to your email address.
Something went wrong, please try again.
By providing your email address, you will receive additional offers from Gazelle. Offer valid on orders of $200 or more. For more information, please view our Privacy Policy.

5 Things to Handle With Your Carrier Before Selling Your Phone

When you first got your phone, it was the best thing ever. You marveled at its camera, the storage space available and all the cool apps you could install on it. Flash forward to now, and your phone isn't so new anymore. The next generation has come out, and you're looking to upgrade.

Before you chuck your old phone into the trash or stick it in a drawer, it can be worthwhile to see if you can sell it. Selling your phone doesn't just put some extra money into your pocket. It also keeps your phone out of the landfill. In 2016, around 435 kilotons of mobile phones ended up as waste around the world. Phones contain a mix of precious metals and some toxic materials which are best kept out of the trash.

Some phone companies are happy to take back your old phone and give you credit or cash for it. You might also find that you get a better offer from a third party that focuses on buying and selling smartphones and other devices. Whatever route you decide to take, there are a few things to take care of with your phone carrier before you sell your Android phone or iPhone.

1. Check out Rules and Restrictions Put in Place by Your Carrier

The first thing to do before you sell your smartphone is to figure out what a carrier is and what control, if any, they have over your phone. In the U.S., two types of companies can give you access to a cellular connection — mobile carriers and mobile virtual network operators.

Mobile carriers are the big companies that own the infrastructure that lets you use your phone. Mobile carriers need a radio spectrum license from the government to operate. If you have phone service from one of the following companies, you're working with one of the big mobile carriers, as of May 2019:

Those four companies aren't the only four companies that provide cell service and 3G/4G data in the U.S. All the other companies fall under the "mobile virtual network operator" umbrella. These companies don't own the infrastructure, nor do they need a license. Instead, they rent access to the cellular networks from one of the big four carriers.

If you're looking to get a new phone and want to sell your old one, it's a good idea to check in with your carrier first. Depending on how long you've had the phone and how you're paying for it, the company might restrict what you can do with it.

Once upon a time, it was common for people to sign a two-year contract with their mobile carrier when they got a new plan and a new phone. In exchange for working with the phone company for at least two years, they got a great deal on a new phone — sometimes the phone was even "free." If a person decided to bail on the contract early, they had to pay a hefty early termination fee.

But just because you didn't sign a contract with your carrier doesn't mean you aren't somehow connected to them for a few years. Installment plans replaced the contract of old. You now have the option of paying for your shiny new smartphone in full, up front, or the option of spreading those payments out over 24 months.

Unlike with the old contracts, you can jump around from carrier to carrier if you want, without paying an early termination fee. However, if you do want to change carriers and end your contract before selling your phone, you will have to pay the balance remaining before you move on.

3. Find out If You Own Your Current Phone

If you're wondering how to tell if you own your phone, in some cases, it can be pretty easy to figure out. If you paid the full price of your phone up front, it's yours to do what you want with it. But if you're on a payment plan, things might not be so clear. You may be making payments towards owning your phone, but you might be leasing it.

For plenty of people, leasing a phone makes sense. When you rent your phone, you get to upgrade it each year without having to pay off the balance. You make payments on the phone for 12 months, a new model comes out, and you get to trade up. You can also keep making payments on the current phone, renting it on a month-to-month basis, or you can talk to your carrier and ask if it will let you purchase the phone.

What you don't get to do if you're leasing a phone is sell it. The phone isn't yours, so you don't have the option of getting cash for it. When you trade it into your carrier, they get it, and you start making rent payments on a new phone.

How can you figure out if your carrier owns your phone? It depends on your carrier. Sprint, for example, calls its program a "leasing" program. AT&T calls theirs "AT&T Next" or "AT&T Next Every Year," T-Mobile's is "Jump" and Verizon's is the "Annual Upgrade" program. It's also worth noting that in some cases, you aren't renting your phone from the carrier, but from the manufacturer. Apple has a leasing program for the iPhone that works with all four of the big mobile carriers.

4. Figure out If You Have a SIM Card

If you turn your phone over and take out the battery or take a look along the side of it, you might notice a small slot or opening. Inside that slot might be a SIM card, aka a "subscriber identity module" card. Back in the day, phones from AT&T and T-Mobile always had SIM cards while phones from Verizon and Sprint didn't.

We don't want to get super technical on you, but one of the main reasons for the difference was the type of radio system each carrier used. Verizon and Sprint used Code Division Multiple Access (CDMA) while AT&T and T-Mobile used Global System for Mobiles (GSM). GSM phones had SIM cards, and CDMA phones didn't.

Then along came 4G LTE. Again, we're not going to get super technical, but 4G LTE is a standard in wireless communications which is based on GSM. These days, pretty much every smartphone out there uses 4G LTE and has a SIM card. If you have an older phone that only has 3G or a non-smartphone that only has 2G, and you used that phone with Verizon or Sprint, it's likely that there's no SIM card. But if you have a modern smartphone from pretty much any carrier in the U.S., it's going to have SIM card inside it.

The SIM card inside your phone might be tiny, but it contains a fair amount of information. It's an integrated circuit, similar to the chip that's embedded in credit cards these days. The card contains details about your identity, such as your phone number and the account you have, such as whether your account is with T-Mobile or Verizon. Some SIM cards also contain information such as your contacts list and text messages. Most SIM cards don't have a lot of storage space, so you wouldn't be able to use them to hold your photos or music.

You should remove the SIM card before selling your Android device or iPhone. You'll want to hang on to the card and install it in your new phone if you're sticking with the same carrier. Since the card contains your subscriber information, such as your phone number, and might have some personal information, such as text messages and contacts, on it, it's a good idea to take it out of your old phone even if you're changing carriers and won't need that particular SIM card anymore.

SIM cards are meant to be removed, so taking one out of your phone shouldn't be too tricky. If your SIM card is on the side of the phone, you might be able to gently push on it to eject it. Some devices require you to use a paper clip to eject the card. If your card is located in the back of your phone, by the battery, you'll want to turn your phone off, then take the battery out. Push on the SIM card gently to pop it out of its spot. 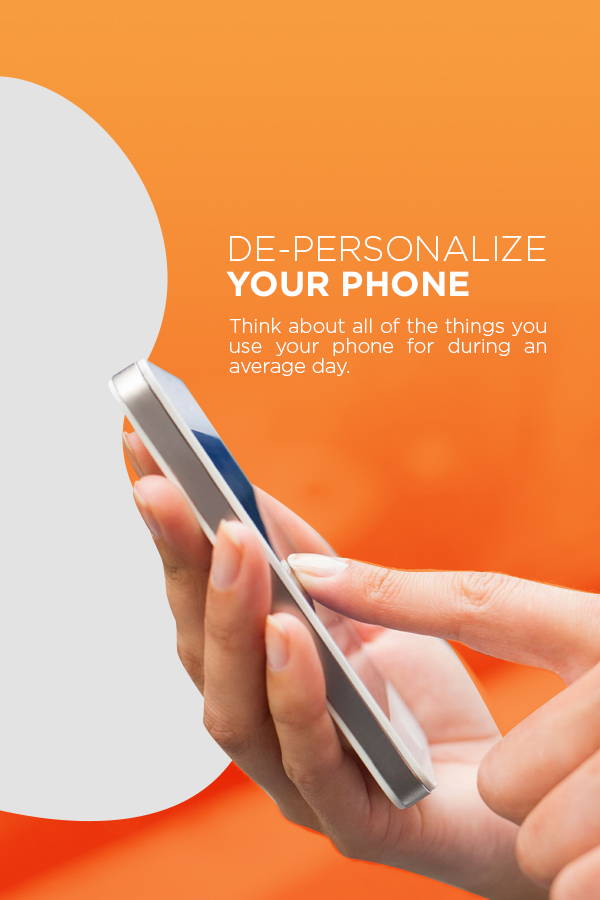 Think about all of the things you use your phone for during an average day. You probably check your email on it, look at social media, take pictures and use maps to figure out where you're going. The smartphone's functionality is one reason everyone loves them so much. But that functionality can put your personal information at risk, especially if you sell your phone without completely de-personalizing it first.

To de-personalize your phone, you want to remove any identifying information from the device. Essentially, you're resetting it to the state it was in when you first bought it. The next person to own your phone shouldn't turn it on and find photos of your cats or be able to log into your email account. Here's what you need to do to clear out your phone before you sell it.

Sell Your Phone With Gazelle

Where can you sell your phone once it's all prepped and ready to go? With Gazelle, you can get an offer on your phone in just a few minutes. You can then ship it to us, for free, and get paid quickly, either through an Amazon gift card, PayPal or a check. We buy both Android and iPhone devices and accept phones in a variety of conditions, including those with cracked screens. Learn more about how our process works and get in touch with any questions you have about selling your phone today.